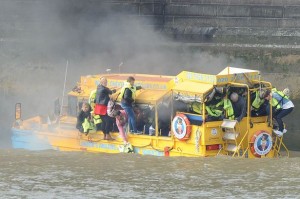 Smoke billowing around them, terrified tourists flee a boat as it bursts into flames today.

The 28 passengers pulled on their life jackets before many plunged in to the water and tried to swim to safety.

Others desperately clung to the outside of the London Duck Tours vessel as the blaze took hold.

John Field, 36, skipper of a rival cruiser, was first on the scene near Parliament.

He said: “The flames were so ferocious I thought the boat might explode. We just started pulling them out of the water. They were in shock.”

Police, fire crews and a helicopter also helped to pluck tourists from the river.

She said: “I was scared the boat might blow.”

Most people were unhurt but seven, including a child, suffered smoke inhalation.

Others were cared for on the riverbank for shock and the effects of the cold.

The grounded boat – the Cleopatra – was towed by firefighters and an investigation was launched. Yesterday it was claimed there had been an earlier fire on the vessel.

He said: “We’d gone on the water, my partner noticed the fire and they went back on land. It’s scary when you’re in the water.”

It is the third time this year a Duck Tours craft – which travels on land and water – has faced trouble.

In June, 22 people were taken to hospital after the Yellow Duckmarine sank in Liverpool. Another one sank there in March.