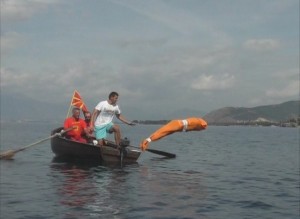 Jane Petkov, a 59-year-old Bulgarian man, tried to set a new Guinness record by swimming across a lake while wrapped in a bag with his arms and legs tied up. Known as “amphibian man” in his native country, Petkov says he relies on concentration and a special breathing technique to pull off the amazing feat.

The record-breaking attempt took place on September 10, on Lake Orhid, in Macedonia, and had Jane Petkov jumping out of a boat in the middle of the water trying to somehow make his way to shore. His arms and legs were tied once before putting on the thick bag, and again over the bag, to make sure he couldn’t use them during his death-defying feat. What’s even more astonishing is doctors who examined him before the challenge found he was severely anemic, which, given his age, made the task even more dangerous. Nevertheless, on the morning of September 10, the amphibian man jumped in the cold water of Lake Orhid and began to swim on his back like a dolphin.

It took Jane Petkov 2 hours and 47 minutes to swim a distance of 1.25 miles (over 2 kilometers) and reach the shore, where the organizers of the event helped him remove the bag. “I was very cold for the first kilometer but after that it was all fine – no problem whatsoever,”he said. ”Had the water been warmer, I could have swum 10km or more.”

The whole even was filmed from a lifeboat and the footage will be sent to Guinness Records, in London. Petkov is known as a follower of Peter Deunov, a renowned Bulgarian religious teacher and founder of a School of Esoteric Christianity.