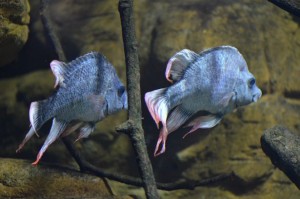 One man just couldn’t bear to leave his pets at home, as he tried to smuggle live fish into New Zealand by putting bags of water in his pockets.

His attempt was only discovered when water started dripping from the pockets of his cargo trousers.

Officials stopped the Vietnamese man, who initially said that he was carrying water from the plane because he was thirsty.

The passenger told them he was bringing the fish – all unidentified species of cichlid – into the country for a friend.

The man had flown from Australia to Auckland in New Zealand.

Ministry of Primary Industries spokesman Craig Hughes said: “This appears to be a deliberate attempt to smuggle fish into the country without any consideration of the biosecurity risk involved.

“That’s something we take very seriously. The fish could have been carrying diseases or have the potential to displace native species.”

The man will face charges under the Biosecurity Act, which carries maximum penalties of five years in jail or a NZ$100,000 (£50,000) fine.

Australia and New Zealand have some of the strictest rules in the world when it comes to transporting live animals, requiring animals to go through strict quarantine procedures.