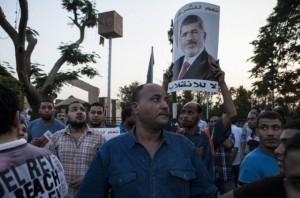 11 members of ousted Egyptian President Morsi’s Muslim Brotherhood have been sentenced to life in prison by an Egyptian military court, for violence targeting the army in the port city of Suez last month.

The men were accused of “shooting and adopting violent means” against the army in Suez on August 14 following a military crackdown in the streets of Cairo against supporters of the ousted President Mohamed Morsi.

Founded in 1928, the Brotherhood was formally dissolved by Egypt’s army rulers in 1954.

The Brotherhood operated for decades as a formally outlawed organisation until veteran autocrat Hosni Mubarak was deposed in 2011.

The movement then won a series of elections culminating in last year’s presidential vote.

The military deposed Morsi on July 3 after mass protests against his rule.

Since then, most of the Brotherhood’s top leadership has been arrested and face charges of inciting violence. Morsi was himself referred to trial on Sunday on that charge.