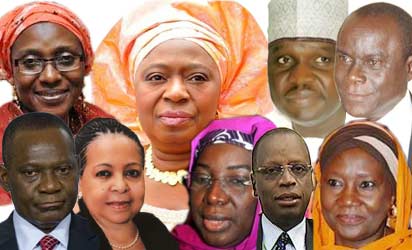 Gov. Sule Lamido of Jigawa on Friday said the state was indebted to President Goodluck Jonathan for allowing the former Education Minister, Prof. Ruqayyatu Rufa’i, to serve in his cabinet.

Lamido made the disclosure at a reception to honour the former minister in Dutse.

He said the state government had no hard feelings that the former minister was removed, adding that they would continue to be grateful to Mr President.

“Before the minister was dropped, the state had two ministers, which was not the case with other states, and we feel highly honoured and dignified.

“As president, he has the constitutional power to hire and fire any political appointee,” Lamido said.

According to him, Rufa’i is a good ambassador of the state who made Jigawa people proud.

He said that the state would continue to remember her for the honour and dignity she had brought to the people.

Earlier, the former minister thanked Lamido for nominating her and the president for allowing her to serve as a minister in his cabinet, describing her experience as wonderful.

Rufai extolled her husband’s endurance and patience, saying: “he is among the few men who can tolerate their wives going out and not minding when these women will be back.” (NAN)