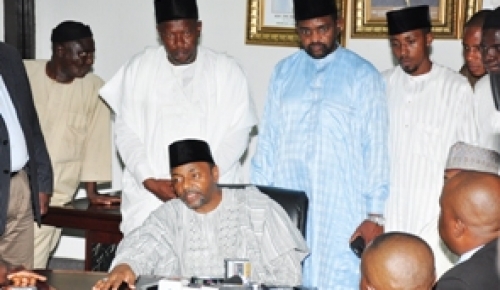 Mohammed, a one time governorship aspirant under the platform of the defunct Congress for Progressive Change (CPC) and son of the late military dictator, General Sani Abacha, yesterday defected to the ruling Peoples Democratic Party (PDP).

Speaking at the Wadata Plaza national Secretariat of the PDP in Abuja yesterday, Mohammed said following broad consultations with his supporters and other members of the party, he decided to rejoin the party he left in 2010.

Mohammed described the PDP as the only party in Nigeria that accommodates all shades of people from across religious and ethnic divides; saying it is the true party for Nigerians.

He said, “In my initial sojourn as a politician I joined the PDP first in year 2010 and we did the best we could at that particular time.  I joined when Chief (Vincent) Ogbulafor was the chairman and shortly after he was replaced by Chief Nwodo.  Sometime in 2010, we decided to change our political affiliation to another party, we had a little problem at that time which in summary, I would say is due to lack of internal democracy at that particular point in time.”

Mohammed, who stated that he will discuss other issues concerning his membership of the party in subsequent meetings, assured that the issue of waiver and consultations with Governor Rabiu Musa Kwankwaso would come later.

He however noted that Kwanwaso is the leader of the PDP in the state stressing that he is not in the party to engage in a power tussle with the governor as only God gives power.

Mohammed was escorted to the PDP national secretariat by hordes of supporters and held a closed door meeting with members of the National Working Committee of the party including the deputy national chairman, Uche Secondus before confirming his return to the party.