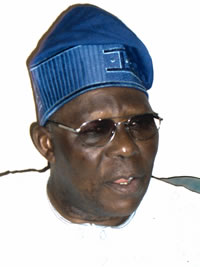 The absence of defence counsel, Chief Adegboyega Awomolo (SAN), on Monday stalled hearing in an FCT High Court in a suit filed by the EFCC against a former Aviation Minister, Babalola Borishade and three others.

At the resumed hearing, Counsel to the EFCC, Mr Sebastian Hon, had told the court that Awomolo, who is the counsel to Timothy Dairo, a former personal assistant to Borisade, was absent in court.

Enda told the court that he received a letter from Awomolo that he would be absent in court due to other matters.

The News Agency of Nigeria (NAN) reports that as a result of this, Justice Abubakar Umar, adjourned further hearing in the case to Nov. 7.

Borisade and Dairo are standing trial alongside Rowland Iyayi, a former Managing Director of the Nigeria Airspace Management Agency, and George Eider, an Australian, for the alleged mismanagement of N5.2 billion Aviation Safe Tower contract.

They were arraigned on Nov. 19, 2009 by the EFCC on a 15-count charge of taking bribe and forging aviation contract documents.

NAN recalls that Justice Umar had adjourned the case to Monday, to enable the EFCC to present Mr Reuben Omosigho, the prosecution witness and operative of the anti-graft agency, for cross examination by Awomolo, counsel to the third accused. (NAN)