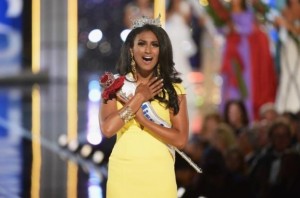 Nina Davuluri’s  (pictured) victory as the first Miss America of Indian heritage isn’t sitting well with some on Twitter, according to the NY Daily News.

How the f–k does a foreigner win miss America? She is a Arab! #idiots.

Brasili also added a picture of a terrorist holding an automatic rifle, but as of press time, his account was inaccessible.

Speaking at her first press conference since winning, Davuluri shook off the attacks. ”I have to rise above that,” she said. ”I always viewed myself as first and foremost American. I’m so happy this organization has embraced diversity. I’m thankful there are children watching at home who can finally relate to a new Miss America.”

And after one Twitter user wrote, “I’m not a racist. She is representing America doing an Indonesian dance. If it was a Miss Universe pageant it would have been cool,” she was hit pretty hard by commenters:
“You do know that India and Indonesia are two different countries … right?” a responder said.