A newly married couple, Francis Edeh and Ann, along with two others died in a car crash, weekend on the Ugep-Abakaliki Road. 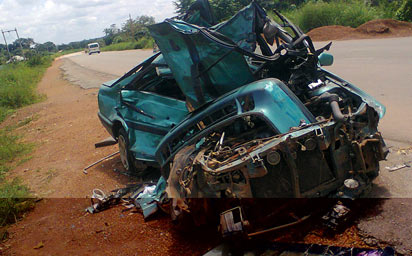 Francis and Ann, both from Ebonyi State and resident in Calabar, Cross River State, were heading to Abakaliki to thank family members, who attended their wedding the previous week, Saturday, September 7, in Calabar.

When they got to Amudo village, some 30 kilometres to Abakiliki, their vehicle developed an electrical fault prompting them to seek the services of an auto electrician.

Omaka, an electrician at Amudo told Vanguard: “The man came to my shop at 4p.m. and said his car had stopped and that he suspects an electrical fault. So I went with him on an Okada (commercial motorcycle).”

He said he did his best but could not repair the Toyota Camry car and sought the assistance of Luke, another electrician in the neighbouring town, Onueke. When Luke came, there was trouble between the him and late Ann. Quarrel Omaka said: “Luke took an Okada from Onueke to Amudo and when he got here, he told Mr. Edeh to pay the Okada man.

“But his wife started shouting, saying why should her husband pay Luke’s transport fare, when he had not even touched the car.” Omaka said despite the tensed atmosphere, Luke still went on with the work, but later advised the couple to leave the car till Monday. He said Ann became angry and the couple left for Abakiliki.

Omaka said: “They refused to take Luke’s advice. The next day, which was Sunday, they decided to come back to Amudo with Ortuh, another electrician in Abakalilki on a chartered vehicle. On the way, the car had a burst tire and collided, head-on, with a tanker and the four of them died.”

Drunk driver A cab driver, Ogbada, told Vanguard that Ortuh used to be a tipper driver before he bought an Audi car with number plate, Akwa Ibom, AG 727, KST with the money he got from driving the tipper. Ogbada said: “I was the one the couple contacted first. But I did not want to go, so I gave it to the tipper driver.

“The man (driver) was drunk that morning and so he collected just N1,500 from the man even when we asked him to collect the complete sum for five passengers, which is N1,800 since the transport fare from Abakaliki to Amudo is N300 and his car carries five persons.” ‘I warned them’ Luke, the electrician in Onueke, said Ann was quarrelsome.

He said: “I told them not to repair that car till Monday, because my spirit told me something. But the woman was angry and thought I wanted to punish them.

The tanker is still parked at the Onueke Police Station, while the bodies of the electrician and the driver were taken to their villages for burial. The couple’s bodies are at Onueke General Hospital mortuary.