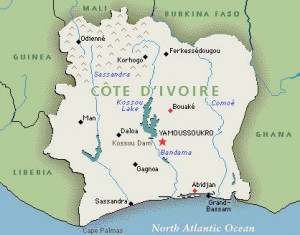 A Nigerian girl, Queen Ebimaho, was on Aug. 24, found dead in a pool of her own blood inside her room in a brothel in Ajame, Abidjan, Ivory Coast, leaving Nigerians in the West African country living with fear of insecurity.

Eyewitnesses told reporters that the corpse of the girl who only arrived Abidjan about two months ago had a series of punctures.

She is said to have been brought into the country by a Nigerian lady identified as Joy Larry.

Many Nigerian girls who are regularly trafficked into the country take to prostitution as a means of survival.

Although no case of death has occurred in the past six months, many of the girls face undue harassment and intimidation from men who patronise them.

Meanwhile some Nigerians residing in Ajame who spoke to journalists have accused the Consular Officer in the Nigerian Embassy, Mr Obinna Ogbonna of treating issues concerning Ebimaho’s death with levity.

They accused the consular officer of failing to make official report to the relevant authorities in the host country to ensure adequate investigations into the cause of the dead.

According to them, the embassy also refused to play any role in the burial of the dead Nigerian in spite of repeated calls on the consular officer.

When contacted, Ogbonna confirmed the dead of the Nigerian, saying: “she died from injuries that looked like stabs from a yet to be identified person

“We took the matter officially to the Ivorian police and we were told that she was stabbed.

“But the girl in question has no consular card, our investigations show that she is just about two months old in the country,” he said.

He said the corpse was taken for burial by a Nigerian identified as Osas, who also resides in Ajame without any official information to the embassy. [NAN]