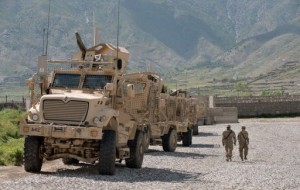 Afghan officials say an apparent NATO airstrike has killed 15 people – nine of them civilians, including women and children – in an eastern province where the Taliban are strong.

NATO, however, says 10 insurgents were killed.

But NATO spokeswoman 1st Lt AnnMarie Annicelli said on Sunday that it was a precision airstrike that killed 10 “enemy forces” and that she had no reports of civilians dying.

Civilian deaths in Nato operations have long been a sore point between the Afghan government and the US-led troops in the country, and they have been a major factor in the animosity many Afghans feel towards foreign forces. Conflicting accounts of who or how many died also are common, especially when remote, dangerous regions are involved and access by independent observers is restricted.

The Kunar province police chief Abdul Habib Sayed Khaili said the air strike had hit a pickup truck carrying the women and children in Qoro village soon after three Arab and three Afghan militants boarded it on Saturday evening. He said some reports had called it a drone strike, but that Afghan officials had been unable to confirm that. Of the 15 dead, four were women, four were children and one was the driver, the police official said.

The Watapur district chief Zalmai Yousefi confirmed the air strike. He also said 15 people had been killed, including women and children.

The Nato spokeswoman 1st Lieutenant AnnMarie Annicelli confirmed that the military alliance had carried out a “precision strike” that killed 10 “enemy forces”, but that it had received no reports of any civilians dying in the air strike. Annicelli had no immediate details on who exactly the dead were or what prompted the air strike.