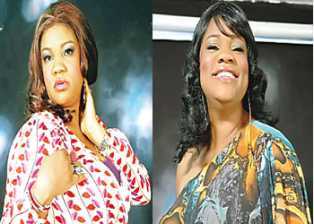 Several years after her marriage, popular Yoruba actress, Ope Aiyeola, who was known for her regular appearances in home videos, relocated to the United Kingdom with her husband,

The beautiful mother of two, who has returned to Nigeria, speaks on touching matters in an exclusive interview.

It was reported that you are back in full force into the industry.
Yes I am, but not in the way people are putting it. My plan is to come home regularly to work; but I still have my family and home in the UK.

Will that not be hectic?
His grace is sufficient; the Lord who has always been my strength is still on the throne.

How would you describe motherhood experience?
Wow! It’s absolutely awesome.

When you were away, what did you miss most about being a celebrated actress?
I was always travelling round to different locations. I really missed that.

How has marriage changed your conception about life?
Marriage has made me understand that two heads are better than one. Actually, being in the right relationship is a blessing. Life isn’t a bed of roses, but with a good partner and good people around me, and of course, God on my side, I am always victorious.

What does it take to have a great marriage?
Well, God’s grace, true love, contentment, submission and of course, forgiveness.

People said you were arrogant. Has that changed now that you are married?
Arrogant? There is nothing to change.
Or what do you think? Do you say I am arrogant?

But that is what we heard…
People are entitled to their opinions.

Why did you come back to Nollywood?
I never left.

If you never left, what were you doing during those moments that you were out of the country?
I was building my home. I still am.

Now that you are back, would your hubby not complain about the tight schedules and all?
Complain?
Yes, you know men and their attitude
My commander in chief is the captain of the ship while I am the sailor; so, he doesn’t complain. My man is not like the others, and that was why I married him. He is 100 percent in support of my career.

Is Ope Aiyeola still as sexy as she used to be?
To my husband, I am very sexy. I love what I see when I look into the mirror, and you can be the judge of that.

As a married woman, do you still get advances from men?
Most definitely. It just corroborates the fact that my hubby is taking good care of me. People always admire good things, you know?

It was said that Baba Suwe got you pregnant and your husband threatened to divorce you?
Okay nah! There is no air to clear.
People know the truth.

So, you never dated Baba Suwe?
All I can say is people know the truth.

On a lighter note, what did your hubby say attracted you to him?
My beauty of course.

Beauty and not intelligence?
Well, what the eyes see comes first before other things.

What’s the most priceless asset that you possess?
That would be my salvation.

Unlike those years when you hit the movie industry, you seem now to be behind in the female fold of leading actresses. Does that not bother you?
Behind? Never! I am ever in front. The results from the break are worth a million years break.

But people say you came back to the industry because you are broke?
Okay!

You haven’t answered my question.
I have answered you. My reaction to this is ‘okay’; or have you got a better answer?

What is Ope Aiyeola up to now?
I have two productions on ground. One of the movies should be released this month and the other in December. They are entitled Agbeko and Jaiye Oba.

What’s your relationship with other female acts, especially Fathia Balogun?
We are colleagues

Just colleagues? Nothing more; you are not even friends?
Nothing more.

I thought you would have settled the issues you had with her years back.
Issues with whom? I have not got issues with anyone. Life is too short for all that