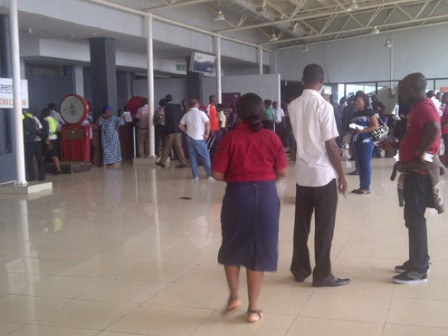 The Oba of Benin, Omo N’Oba Erediauwa, has appealed to the Federal Government to upgrade the Benin Airport to an international status being one of the oldest in the country.

The Oba made the appeal when he received in his palace, the managing director of Federal Airports Authority of Nigeria (FAAN), George Uriesi, who paid him a courtesy visit.

Oba Erediauwa also expressed appreciation to the aviation authorities for granting his request that airplanes should stop flying directly over his palace even as he expressed surprise on the survival of a boy – Daniel Ohikhena – who stowed away on the under carriage of a plane recently.

According to a statement from FAAN, Uriesi had assured the public especially air travelers from Edo and surrounding states that the operational facilities at the Benin airport would soon undergo major transformation.

The FAAN boss was in Benin to sensitise the airport community on the dangers of youths attempting to stow away on aeroplanes.

Uriesi stressed that it was a miracle that the stowaway teenager survived the Arik flight from Benin to Lagos.