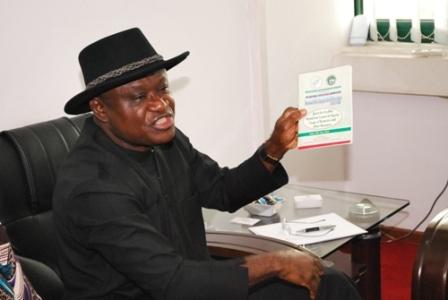 President Goodluck Jonathan has been advised by the Christian Association of Nigeria (CAN) not to succumb to pressure by the Arewa Consultative Forum (ACF) to sack the chairman of National Population Commission, Chief Festus Odimegwu, following recent comments he made that the 2006 census was marred by distortion and falsification of figures especially in the North.

Odimegwu had said, “No census has been credible in Nigeria since 1816. Even the one conducted in 2006 is not credible. I have the records and evidence produced by scholars and professors of repute; this is not my report. If the current laws are not amended, the planned 2016 census will not succeed.

The above exposition by the former Nigerian Breweries boss earned him a reprimand from Kano State Governor, Rabiu Musa Kwankwaso, who said Odimegwu’s appointment, was a mistake in the first place and fell short of labeling the NPC chairman a drunkard.

The revelation also reportedly embarrassed the Federal Government that the Office of the Secretary to Government of the Federation had to issue Odimegwu a query over his unguarded utterances.

CAN, however, called on the Federal Government to withdraw the query and instead tender an apology to Odimegwu in the interest of fairness, insisting that indeed, the 2006 census results were cooked to favour the North.

The association also flayed the politicization of Odimegwu’s comment, saying they were ploys by the North to blackmail Mr. Jonathan ahead of the 2015 general elections.

CAN, which made its submission known in a statement by the Public Relations Officer of the association in the 19 Northern states and Abuja, Mr. Sunny Oibe, said the call by Arewa Consultative Forum and Kwankwaso for the removal of the NPC boss before the 2016 census because he is a southerner was misplaced.

He said: “The call by ACF on President Goodluck Jonathan to make sure that Odimegwu does not supervise the 2016 census is misplaced

“The question we are asking is: which parts of the North are they saying have higher population? Since when has ACF become a political party that every time they will always dabble into politics?

“We in CAN hereby demand that the Federal Government should withdraw the query issued to Odimegwu with immediate alacrity. Why would the government be blindfolded by Kwankwaso?

“The government should also apologize to Odimegwu; Jonathan should make sure that nothing happens to him. We are surprised that Jonathan is allowing himself to be intimidated by the Islamic North.

“Before the 2006 census, we confronted the former chairman of NPC, Mr. Samuila Makama from Plateau State on why religion and ethnicity are not included in census matters to be able to ascertain who is who in Nigeria and the man was sweating.

“We wanted to know which tribe and religion exist in Nigeria and that this information must be included in census data. The man was sweating. The North then blackmailed and intimidated ex-President Olusegun Obasanjo that if the indices were not removed, they won’t participate in the exercise.”

According to Oibe, although there was a census that was conducted during the military junta of General Ibrahim Babangida, Lagos State was given a figure more than Kano.

However, Kano was split into Jigawa and Kano States by another military dictator, late General Sani Abacha and this prompted the CAN image maker to observe that, “As at today, half of that Kano is more than Lagos. So are we saying that Lagos is not growing, meaning that it’s only the core North that is growing?”