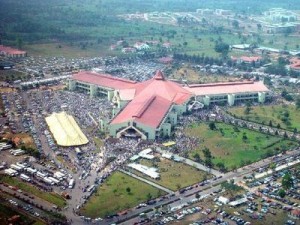 The State Commisioner for Information and Strategy, Alhaji Yusuph Olaniyonu, identified the assaulted officials as Mr Peter Falomo, a reporter with OGTV and his cameraman, Lekan Egunjobi.

According to a statement by the commissioner, the journalists were severely beaten and their camera was damaged when they went to the Ota premises of the church to cover the service of building inspection notices by officials of the Ministry Of Urban and Physical Planning.

The statement said the video camera of the TV crew was forcibly seized and damaged in the process. The camera was only released after the recording had been wiped off.

“Apart from the TV crew, two officials of the Ministry were also injured by the irate church members who prevented the team from entering the premises.

“The assault was witnessed by the Head Pastor of the Church, Bishop David Oyedepo who equally was visibly angry by the decision of the officials to attempt to carry out their statutory duties in his church premises. 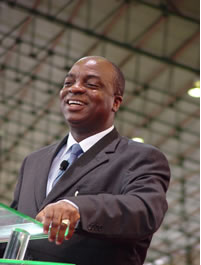 “At a point, the Bishop was saying unprintable things while querying the audacity of the state officials to attempt to regulate building of structures for commercial purposes in his church premises.

“The officials of the Ministry of Urban and Physical Planning who were accompanied by policemen had, following the previous day similar assault of their counterparts in the OGIRS, earlier made a report of their planned visit to the Winners Chapel premises at the Divisional Police Station, Onipanu, Ota”,the statement read in parts.

The injured were said to have been taken to the General hospital in Ota where they were treated and subsequently discharged.

The matter was also said to have been reported to the police.

In his comments, General Manager of the Ogun State Urban and Physical Planning Board, Mr Stephen Adewolu, who was part of the team that was molested in Ota, expressed shock at the lawlessness displayed by the Winners’ Chapel members and their leaders.

“No organisation can carry on as if it is above the law. We have information that the people in that church are just building structures indiscriminately without building approval, without necessary environmental impact assessment reports and they are violating planning laws and regulations.

“We only went there to serve statutory notices on the on-going building development and they are behaving as if the premises of the church is not covered by the laws of the state in which it is located,” he said.

Officials of the Winners Chapel were also said to have shunned meetings of the Stakeholders Forum established by the state government for representatives of organisations located in the state to deliberate with the government on issues of common interest, particularly compliance with extant laws on physical planning and taxation.