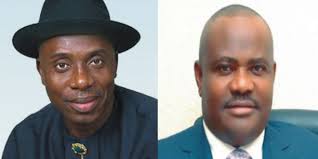 The supervising Minister of Education, Nyesom Wike has been challenged by the Rivers State governor, Rotimi Amaechi to open up on how the 2011 governorship election in the state was won and lost.

Mr. Amaechi, who has been having a long running battle with his former Chief of Staff since he became Minister of State (Education), yesterday in Port Harcourt, declared that Wike must show gratitude, since he brought him up politically.

The Minister questioned Mr. Amaechi’s much touted political strength stating that he became governor through the Supreme Court’s landmark judgment of October 25, 2007, adding that he knew how the governor’s re-election was won and lost in 2011; maintaining that party structure could not be bought.

Wike on Sunday at Omoku, the headquarters of Ogba/Egbema/Ndoni Council, during the inauguration of the council and wards executives of the Grassroots Development Initiative (GDI), of which he is the grand patron, declared that he knew how Gov. Amaechi was re-elected in 2011.

But Amaechi, through the Chief of Staff, Government House, Port Harcourt, Chief Tony Okocha, said: “The minister of state for education ought to respect his office. I sympathise with those following him (Wike) about. He is using them to solidify his position in the Federal Executive Council (FEC).

“Governor Amaechi cannot pack and go, because he is performing excellently.

“Let Wike talk about how Amaechi did not win 2011 governorship election. Let him tell Nigerians how the election was won and lost,” he dared the Minister.