Home News Feed Oritsejafor Has Disgraced The Legendary CAN And Turned It Into A Political...
Facebook
Twitter
WhatsApp

Former minister of the Federal Capital Territory (FCT) and a chieftain of All Progressives Congress (APC) , Mallam Nasir el-Rufai, has berated the current president of the Christian Association of Nigeria (CAN), Pastor Ayo Oritsejafor over his “utterances and behaviour which he says amounts to repudiation of the moral authority, fair-mindedness and high standing his predecessors invested in that office.” 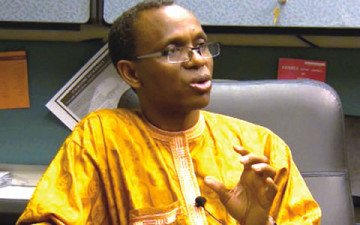 el-Rufai said the casual observer would likely mistake Oritsejafor for a minor protocol official of government as he had pathetically cheapened the erstwhile integrity of the CAN presidency.

The former FCT minister commended the past chairmen of CAN and lamented that Oritsejafor did not follow in their footsteps.

“Many in Nigeria today may not remember the name of Cardinal Anthony Olubunmi Okogie, but if there was any opposition to the military regimes of the eighties and nineties, the Christian Association of Nigeria (CAN) under him definitely represented a voice of resistance to those governments’ excesses. At a time when many people kept silent in the face of human rights abuses, Okogie faced the military government and told them some home truths. It didn’t matter if the victims were Muslims or Christians; it didn’t matter whether they were from the North or South; CAN fought for all Nigerians. Okogie had the moral authority to act, and did so with dignity, to the admiration of all of us.

“Okogie’s bravery was not unusual for CAN leaders; if anything, in the turbulent history of this country, there is a proud tradition of leaders of CAN who spoke for and stood by the people of this country. They used their moral authority to defend the rights of all Nigerians even during the most brutal military dictatorships or corrupt and inept civilian administrations. The courage of the likes of Cardinal Anthony Olubunmi Okogie, Archbishop Peter Jasper Akinola, Reverend Sunday Mbang and Cardinal John Onaiyekan, for instance, are shining examples of faith in action, with compassion for the oppressed and chastisement for the tyrants,” he said.

The APC chieftain further said that “while Pastor Oritsejafor chose to be a subaltern to power, other men of faith rose to stem division and help the country achieve peace, efforts for which Cardinal John Olorunfemi Onaiyekan and the Sultan of Sokoto were nominated for the Nobel Peace Prize. Such an esteemed global honour is a measurement of leadership quality and character; as distinct from Oritsejafor who prefers earthly gains and ostentatious lifestyle of private jets! Everyone can recall that November morning in 2012 when Oritsejafor accepted the gift of a private jet in the presence of a smiling President Jonathan.”

He said people had refrained from correcting the “errant” ways of Oritsejafor because of the sensitivity of religion in Nigeria but courage must be summoned to point the CAN chairman’s transgressions against Nigerians.

“A case of the descent into toxic politics is evident from the statement purportedly issued in CAN’s name in defence of Oritsejafor. The language of the statement is very similar to the gutter language usually spewed out of the presidential villa whenever any citizen expresses the right to question the corruption, impunity and incompetence of the Jonathan administration.

“The sudden attempt to assume the role of political adviser to General Muhammadu Buhari, a person that Oritsejafor has done everything to malign and smear, amounts to everything a religious organisation should not be. When purportedly religious leaders or organisations become brazenly partisan, they should not complain directly and through surrogates when they are responded to in like manner.

“God’s work cannot be reduced to petty electoral calculations. Neither should those who claim to be on the Almighty’s mission indulge in base blackmail and falsehood, or encroach on God’s prerogative to bestow grace, provide final justice and avenge wrong.

“Let the leaders of faith show good example when they step into the public arena. The merchants of religiosity, those who specialise in distorting the sobriety of faith into wares to be traded for political and commercial favours, should not be allowed to divide our country or to derail the diversity of our creeds and tongues into a reason for strife.

“Above all else, we are all human, sharing the same biology and deserving to be free and secure, whatever our beliefs and ethnic origins. In the final analysis, the needs and wants of the less privileged Christian destitute in Abia is not that much different from that of a Muslim Almajiri in Zamfara, “he said.