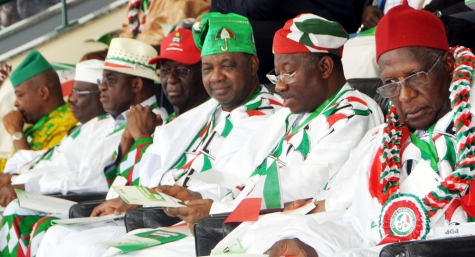 Despite the fractionalization of the Peoples Democratic Party (PDP), the Osun State chapter of the party has pledged its loyalty to President Goodluck Jonathan and the faction led by Alhaji Bamanga Tukur.

In a statement by its Chairman, Alhaji Gani Olaoluwa in Osogbo on Monday, the state chapter of the party took the position to support the president and Tukur-led faction after a meeting of the PDP leaders in Osun State, held in Abuja.

The stakeholders’ meeting, according to Olaoluwa, was attended by a member of the Board of Trustees of the party, Alhaji Shuaibu Oyedokun; Minister of State for Defence, Erelu Olusola Obada; Dr. Olu Alabi; Jide Adeniji, Senator Iyiola Omisore; Chief Abiola Ogundokun; and Chief Francis Fadahunsi, among others.

The PDP chairman said the party in the state remained formidable and would not support the splitting of the party. It also enjoined any member that had any issue with the party to tow the path of dialogue, rather than being confrontational.

The statement read in part, “Osun state chapter of the PDP has dissociated itself from the group that broke out of the PDP, while passing a vote of confidence on the leadership of the party at the national level.”