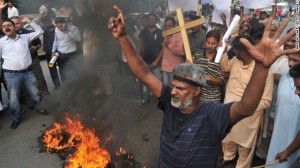 Pakistani Christians have protested across the country to demand better protection for their community after a pair of suicide bombers blew themselves up outside a historic church in Peshawar, killing more than 80 people and wounding at least 140 others.

Angry Christians blocked roads and burned tires as they demanded government to take stronger steps to protect them.

Churches and other sites important to the Christian community in Peshawar have been given little extra security, said police official Noor Khan.

“Our state and our intelligence agencies are so weak that anybody can kill anyone anytime. It is a shame,” said Paul Bhatti, whose brother, a federal minister, was gunned downed in 2011. 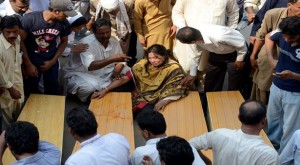 While government officials have denounced the attack, this has been of little consolation to the Christian minority.

The small and largely impoverished Christian community suffers discrimination in the overwhelmingly Muslim-majority nation but bombings against them are extremely rare. There is growing concern against the possibility of future attacks.

“We had very good relations with the Muslims — there was no tension before that blast, but we fear that this is the beginning of a wave of violence against the Christians,” said Danish Yunas, a Christian driver wounded in the blast. “We fear there will be more of this in the future.” 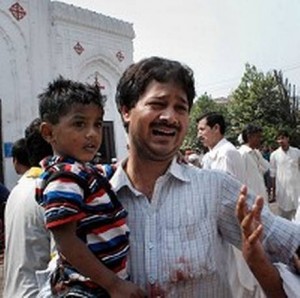 The suicide bomb attack on All Saints church in the northwestern city of Peshawar came after a service on Sunday is believed to be the deadliest ever to target Pakistan’s small Christian minority.

Only around two percent of the Pakistan’s 180 million population are Christian.