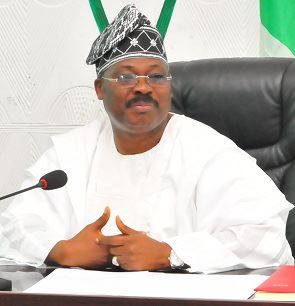 Governor Abiola Ajimobi of Oyo State has attributed his defeat in the 2007 gubernatorial election in the state to divine providence.

Ajimobi, it would be recalled, lost that year’s election to Chief Adebayo Alao-Akala of the Peoples’ Democratic Party, PDP.

But the governor, while speaking at the 31st Holy Ghost Convention with the theme: “Divine Favour” organized by the Sword of the Spirit Ministries, presided over by Bishop Wale Oke which held at the International Conference Centre, University of Ibadan on Sunday, said unknown to him at the time, God was removing all the ‘bad eggs’ that will not allow him to perform in office.

In his words, ” When I was praying up and down, fasting fervently, I still lost that election and I was furious and angry and even lost my faith in God. But unknown to me, God did not allow me to win the election because it is not yet my time and He was clearing off the bad eggs that will not allow me to perform in government.

“It was after God had removed the bad ones that He allowed me to become the governor of Oyo State. Then Pastor Enoch Adeboye and some other men of God had prayed for me. When I went to Pastor Adeboye he asked God to forgive me and allow my dreams to come into fruition, so after a year, God answered my prayer. All the peace and progress that had been recorded within my two years in office would not have occurred if I had won the election in 2007”, Ajimobi stressed.