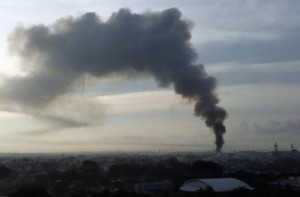 The Philippine military launched a helicopter assault on Monday at Muslim rebels occupying parts of a major southern city, stepping up efforts to end an eight-day standoff that has left dozens dead.

A helicopter was sent to undertake an aerial survey of areas still held by Filipino-Muslim rebels in coastal villages of Zamboanga in the southern Philippines.

“As part of calibrated military operations in the area,” the Air Force has began “a targeted air strike” on areas that might still held by MNLF rebels who initially controlled six coastal villages in Zamboanga last August 9, the local government of Zamboanga said in its Twitter account.

In Metro Manila’s suburban Quezon City, the military said the MNLF rebels are still holding 183 hostages in two holdout coastal villages, around 147 in Sta. Barbara; and 36 in Sta. Catalina. They could be new hostages, another source added.

Several of the initially held 200 hostages “were able to escape [from the MNLF rebels],” Roxas said, adding that those freed underwent debriefing from social workers and security forces.

Government officials have expressed concern that some of the people who claimed they were hostages might be MNLF members, said Roxas, adding that authorities had arrested some MNLF rebels in civilian clothes among a group of hostages. They were allegedly taking advantage of the local government’s assistance when it called for the mandatory evacuation of residents in MNLF-controlled villages last Saturday.

Some 63 MNLF rebels out of the 180 who controlled six coastal villages in Zamboanga were arrested, Roxas said.

Part of the military’s 3,000 ground troops were tasked to secure and undertake mapping operations in four coastal villages that were abandoned by the MNLF rebels. The rest were assigned to breach two areas still held by the rebels.

President Benigno Aquino has remained in Zamboanga since Friday to oversee the military’s “air strike and calibrate operation” against the MNLF rebels on Monday, the presidential palace said.

The ceasefire that was negotiated by Vice President Jejomar Binay with MNLF founding chairman Nur Misuari and Defence Chief Voltaire Gazmin last Saturday ended because of disagreements on conditions set by both camps.

“The military is moving forward to the coastal villages,” the Armed Forces of the Philippines said.

Affected areas need a major rehabilitation plan. Houses and buildings were burnt, if not disfigured. In Zamboanga City, a mortar hit and exploded near a car, outside a house on Francisco Drive in Camino Nuevo village.

The growing number of evacuees has given the city a chaotic atmosphere. Social Welfare Secretary Corazon Soliman said the government’s immediate problem involves the rehabilitation of 70,000 evacuees.

The centre of the country’s sardine industry has also stopped producing its major product, resulting in economic loss of P45 billion a day.

The MNLF’s takeover has underscored the fragility of peace in the south, despite peace talks that began in the mid ’70s, observers said. They also blamed the proliferation of firearms in the south as a source of relentless armed struggle from rebels.

Both rebel groups waged a separatist war that killed 150,000 in the south in the early 70s.