Lagos State Governor Babatunde Fashola has said every resident of the state will henceforth be identified by a unique identification number to be generated from a bio-metric data. 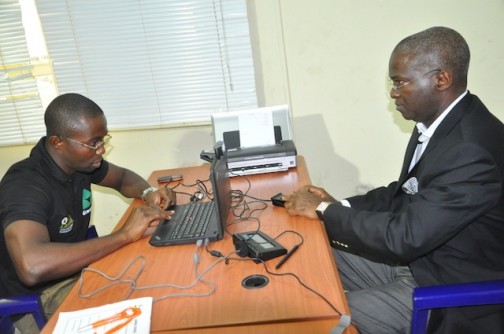 Fashola being registered as a Lagos state resident

He added that the ID number would be unique to every individual and would be theirs until death.

The governor said this in Lagos on Thursday, during the inauguration of the initiative, which would be handled by the Lagos State Resident Registration Agency.

Fashola said the scheme was a 10-year journey that would help the government to effectively plan and meet the needs of the state residents.

He said, “This is a watershed in the history of Lagos State, as this will enable the state government register and collate the data of all the residents in the state.

“The data gathered from the exercise will afford the state emergency response team to respond to emergency effectively as they will not need to ask for the caller’s data since he or she is calling from his residence.”

He explained that the idea to have a data base of all residents in the state was conceived in 2003 during the administration of his predecessor, Bola Tinubu.

Fashola pointed out that although there were a lot of government agencies in the country, data is insufficient. He expressed the confidence that the state resident registration exercise would be used to fill the gaps in Lagos.

The governor said an individual must have a means of identification that showed that he or she resided in the state, adding that indigenes of Lagos that lived in other states were not eligible for the registration.

He argued that the development that the nation craved would not occur if reliable data was not available, saying data had become the most demanding currency in the world and the bases of information.

Earlier, the LASRRA General Manager, Ms. Olayinka Fashola, said the aim of the exercise was to assist government to provide adequate social amenities that would serve the people better.

She said, “The exercise will assist government in road rehabilitation, provision of more schools, power and other social amenities for the use of people. This will also enable the government to serve the people better.”