Actor turned Politician, Hon. Rotimi Makinde who got married to his 23-year-old beauty queen, Oyebanke in a talk of the town celebration is said to be broke. 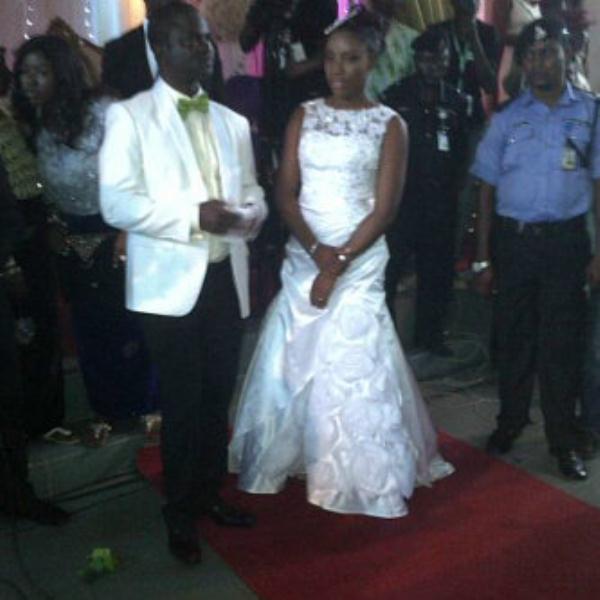 Penultimate weekend, Osun State was almost a sort of Mecca as many politicians and movie practitioners thronged the state for the wedding ceremony of House of Representatives member, Hon Rotimi Makinde and his new wife, Oyebanke.

The event took place in Ada town and for those who witnessed the wedding, guest were given five star treatments. There were assorted food and drinks served round to the invited guests. There were traces of class and style in the organisation of the event, considering that the bride is a beauty queen, who has a lot at stake and also to show to her friends and critics that she is now a wife of a federal lawmaker.

Banke, as Rotimi Makinde’s wife is fondly called by her friends, is said to be 23 years old, just about the same age with her husband’s first daughter. The lawmaker dumped his wife of many years shortly after getting to Abuja to make laws for Nigerians. Soon after, his relationship with the beauty queen became a public affair until they solidified it few days ago.

According to a source the Yoruba actor turned politician is now broke. The reason, as we were reliably informed, is not far-fetched.

We scooped that the wedding gulped a lot of money from Makinde’s savings. Some of the things used for the ceremony, we were also told, were allegedly taken on credit. Days after the wedding, we gathered that some of his creditors have allegedly been knocking on his door asking for their payments.

He’s also been allegedly harassed in his home town by those he’s owing and he has allegedly been told that he can’t leave the town for anywhere unless he pays the debt.

We also gathered that the alleged financial trouble started for Makinde during the burial of Tinubu’s mother. We were told by our source that the lawmaker allegedly went to borrow the sum of N50million from a bank and changed it into dollar notes and then allegedly begged Governor Rauf Aregbesola of Osun State to take him to Tinubu to present him the token as contribution for his mum’s burial.

This action, as our source said, reportedly took Aregbesola aback and asked Makinde why he was doing what wasn’t too necessary of him to do, but the Osun lawmaker reportedly insisted. We learnt that Makinde decided to use the money to water the ground for his second term ambition.

Nigeriafilms.com reliably learnt that Makinde’s father has many children and has allegedly not really helped them since his status as a House of Reps member.

Effort to reach the lawmaker on this story were unsuccessful as at press time.