As leader of the world’s 1.2billion-strong Catholic community, protocol usually dictates that visitors bow to the Pope when they meet him at the Vatican, but the Pope broke this tradition by lowering his head to Muslim Royal Queen Rania of Jordan when she came to the Holy City with her husband King Abdullah II on Thursday. 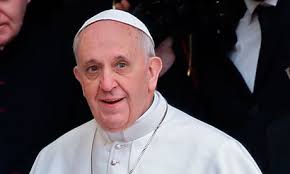 The Pope has once again shown his willingness to break with tradition by bowing to the royal Queen. He however, made no discernible bow toward her husband, the king.