A baboon grabbed a female reporter’s breast while live on air. 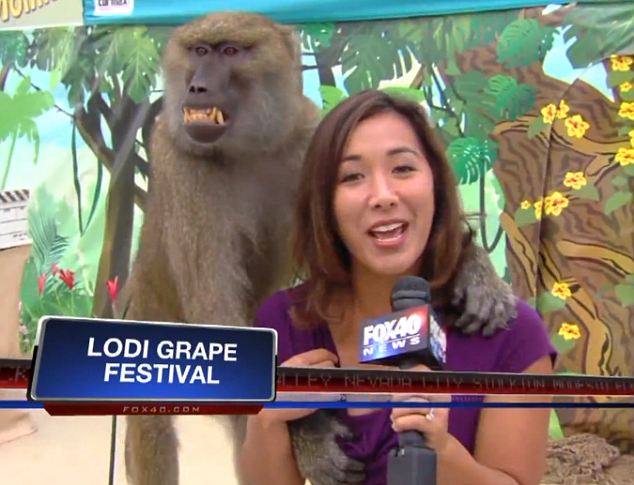 On September 12, 2013, Sabrina Rodriguez, an award-winning TV presenter, was reporting on the Lodi Grape Festival in California.

She introduced Mickey the baboon to the viewers, and the monkey politely shook her hand. And then seized his opportunity to grope the female presenter.

Rodriguez carried on and even attempted to joke: “He’s trying to cop a little bit of a feel”.

Mickey refused to let her go, as the presenter finished her segment by telling the viewers to “join soon, when we’ll be learning a bit about why baboons like grapes”.

Asked if the baboon bared his teeth because he was smiling or mad, the reporter responded, “I’m gonna go with smiling.”

Mickey the baboon has already found international fame appearing next to U.S.actor Tom Cruise in the 2012 film Rock of Ages.
Watch Video >>>http://www.youtube.com/watch?v=Zlms0VE4fm8&feature=player_embedded