A breach in an underwater manifold in Agip’s Brass Swamp location, Bayelsa State, has been discharging crude oil into streams and adjourning creeks. 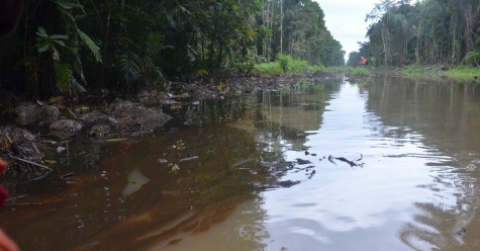 Heavy oil equipment deployed by Agip’s contracting firm, Deck Oil and Gas, seen at the site of the ecological disaster. SaharaReporters talked to a community leader, who said they suspected that the equipment might have caused the spill as two earth-moving machines were abandoned at the construction sites near the spill site.

“Crude oil is floating on the water, and the members of our communities are anxious,” said a community leader.

“An Agip engineer told us that the oil leak may have emanated from an underwater valve at the company’s pipeline network,” a member of the community said.

Collins Adikoko, the deputy paramount ruler of Ikeinghenbiri in Olodiama clan, stated that his community was distressed by the leak. He added that the oil had spread into the creeks and natural fish ponds where most members of the surrounding communities fished.

“We have consistently been neglected by Agip which pollutes our area without any form of compensation,” said Mr. Adikoko. “And if you go around our swamps and bush, you see oil everywhere,” he continued.

The officials of the Nigerian Agip Oil Company (NAOC) and members of Ikeinghenbiri community in southern Ijaw local government in Bayelsa had scheduled a joint visit to one of the oil spill sites on September 19, 2013, Thursday.

A source disclosed that the oil leak was discovered on September 16, 2013, Monday, by a woman who was returning from fishing. The chairman of Community Development Committee in Ikeinghenbiri, Mr. Marshall Josiah, said that the visit to the spill site was scheduled after a report was made to the oil firm.

“The spill was reported to Agip officials as soon as it was discovered on Monday and as we speak the spill is still going on,” he said. “We have been notified by the management of Agip that they will be convening a joint investigative visit to the spill site this Thursday, so we are expecting them so that we can take stock of the damage done to our environment.” He continued: “Our fishermen were compelled to suspend fishing because the whole creeks and swamp were contaminated and today we can only depend on imported frozen fish. It is a strange thing for us as a fishing community to be buying frozen fish when we are supposed to be selling fish to others.” He said the community needed relief and appealed to the government to look into their plight.