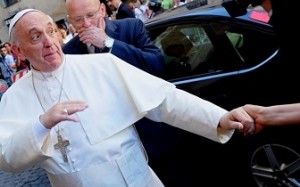 An Argentine archbishop said Pope Francis jokingly told him he chose to live in a simple Vatican residence to avoid getting robbed in the more regal papal palace, the official Catholic news agency quoted the Buenos Aires Church authority as saying.

Mario Poli, who replaced Francis as archbishop of Buenos Aires, has twice met the leader of the Catholic Church since he was picked in March, according to a story posted on the website of the Catholic news agency of Argentina AICA.

“Just to gossip with him a bit we said, ‘Aren’t you going to live in the papal palace?’ and he told us ironically, ‘There? So they can rob me? No!’,” Poli was quoted as saying in a speech to the faithful on Saturday.

The comments were reported by local newspapers on Wednesday. Poli said the Pope used the Argentine slang term “afanar,” which means to steal.

Since his election on March 13, Francis has opted to live in a small suite in a busy guest house instead of the opulent papal apartments where he would be surrounded by the offices of the curia, the Vatican’s central administration.

Poli said Francis is enjoying his role as the head of the Church and has traded the sullen “funeral face” he used to wear in Argentina for gracious smiles.

“He smiles at everyone” now, Poli reportedly said. “The Pope is very happy… He says it’s very entertaining being Pope. Yes, there are problems, as in all families, but there are many people helping him.”