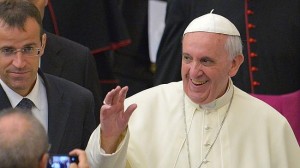 Pope Francis is set to announce the date that predecessors John Paul II and John XXIII will be made saints in a ceremony expected to draw hundreds of thousands of pilgrims.

The popular Polish pope John Paul and his Italian predecessor, two of modern-day Catholicism’s most influential figures, will be canonised at a joint ceremony at the Vatican likely to take place on April 27, 2014.

The unprecedented double sainthood for two popes is seen by Vatican watchers as an attempt to breach a traditional left-right divide in the Church.

“John XXIII is generally a hero to the church’s progressive wing while John Paul II is typically lionised by Catholic conservatives,” said John Allen, Vatican expert for the US National Catholic Reporter.

Allen said the decision could be interpreted as “a statement that any attempt to set them at odds is artificial, and that what they had in common is more fundamental than any perceived differences’’.

Sainthood normally requires two “confirmed’’ miracles, though Francis has approved the canonisation of John XXIII (1958-1963) – with whom he shares a personal touch and reformist views – based on just one.

John Paul II, who served as pontiff from 1978-2005, was credited with his first miracle just six months after his death, when a French nun said she had been cured, through prayer, of Parkinson’s – a disease he had also suffered from.

His second miracle was reportedly carried out on a woman in Costa Rica, who said she was healed from a serious brain condition by praying for John Paul’s intercession on the same day he was beatified in 2011.

Nicknamed “The Good Pope’’, John XXIII made his name by calling the historic Second Vatican Council (1962-1965) which overhauled the Church’s rituals and doctrines, reached out to other faiths and raised the status of lay people.

The reportedly miraculous healing of an Italian nun who had severe internal haemorrhages was attributed to John XXIII when he was beatified in 2000.

Francis is believed to have waived the need for a second miracle because his canonisation had been called for by the participants of the Second Vatican Council in 1965, who wanted to pay homage to the man who ushered the Church into modern times. [AFP]