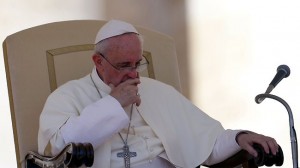 Pope Francis has come under fire from victims groups following news that he had quietly sacked the Vatican’s envoy to the Dominican Republic over allegations of pedophilia.

“Like all of his predecessors, Pope Francis is acting belatedly, secretively and recklessly,” said Barbara Dorris, outreach director for the US-based Survivors Network of those Abused by Priests (SNAP), on Thursday.

“Catholic officials act only when forced to do so by media pressure,” she said in a statement.

“When they do act, they act secretively – in this case, by not disclosing the allegations, the suspension or the reason for the suspension.”

On August 21, Monsignor Josef Wesolowski, the papal nuncio in Santo Domingo, was sacked without the Vatican sharing the news with the public.

On Wednesday, Vatican spokesman Federico Lombardi told the I.Media news agency on Vatican affairs that an investigation was under way in Rome into allegations of child sex abuse against him.

The Dominican press said the diplomat had sex for money with underage boys in the “Zona colonial”, the historic centre of Santo Domingo.

Wesolowski, a 65-year-old Pole who has been the papal envoy in Santo Domingo for five years, was ordained in 1972 by the then Archbishop of Krakow, Cardinal Karol Wojtyla, who later became Pope John Paul II.

John Paul II appointed him nuncio to Bolivia, his first posting. Wesolowski also worked in several countries in Central Asia and was appointed to the Dominican Republic by Pope Benedict in 2008.

Pope Francis has vowed to crack down against abuse in the Catholic Church, reiterating the zero-tolerance approach eventually taken up by his predecessor Benedict following a wave of revelations.

In July, Francis bolstered criminal legislation against child abuse in the Vatican, issuing a decree that included “a broader definition of the category of crimes against minors” including child prostitution, sexual acts with children and child pornography.

The new laws introduce specific forms of crime that are indicated in international conventions that the Vatican has already ratified including against racism and war crimes and on children’s rights.