A$AP Rocky may have just been “chillin” with Rihanna when they were spotted together in New York City in August, but it was all for the cameras. The duo’s “Fashion Killa” video is officially out, and in it, the twosome crúsh on each other… and designer duds.

The video, premiered on GQ, follows the two artists as they hang around an apartment before painting the town red, going on an after-hours shopping spree in several high-end stores. The playful couple gets flírty not only with each other but also the couture they try on for each other. 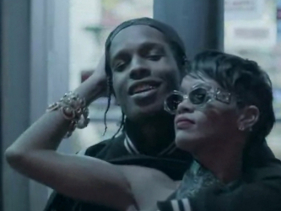 When they aren’t playing with the clothes, they’re snuggling on the street. But throughout the video, there is yet another, more mysterious storyline. A masked man follows the pair around town. At the end of the video, he spray-paints the word “art” on the side of a building.

The video was directed by A$AP Rocky and hip-hop fashion maven Virgil Abloh. Earlier this week, the rapper opened up to “106 & Park” about enlisting Rihanna to play his onscreen love interest.

“She’s a fashion killa in my eyes. I respect her jigginess. I respect her fashion sense so that’s why I used her as a female. It’s about art, the whole video, we wanted to base it off art,” he explained, before breaking down who the masked graffiti artist is. “It’s this famous, well he’s infamous, he’s a tagger. His name is Kidult. We use his art and we use her art for being a fashion killa and made this conceptual video. Fashion is art.”

He’s never been shy about opening up about loving Rihanna for her sense of style. Last December, when rumors had it they were a couple, Rocky denied a románce, but did gush about her. “She has a lot of style, and I think that’s what she saw in me and what she liked, because she saw that I was eclectic with the way I did my music and my style was different,” he said. “I really think it was more she admired me as an artist, and the fact that I’m handsome helped.”