Pop star Rihanna spent a weekend at the beach in Thailand, leaving behind a trail of racy tweets and incriminating Instagram photographs that led police to arrest two people for allegedly peddling protected primates.

On a break from her Diamonds World Tour, Rihanna stopped in Thailand to visit the island of Phuket, where she befriended some local wildlife. 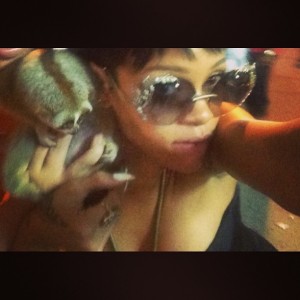 She posted a link on Twitter to an Instagram photo that showed her in sunglasses snuggling up to a furry primate called the slow loris, and tweeted Friday: “Look who was talkin dirty to me!”

The slow loris, a squirrel-like animal with big eyes, is native to Southeast Asia and is listed as a protected species.

“Phuket authorities were alerted to the picture (of Rihanna), and last night police arrested the two individuals who brought out the loris as a photo opportunity for tourists,” a Phuket district chief, Weera Kerdsirimongkon, said by telephone Sunday.

Police confiscated two lorises from the pair – a 20-year-old man and a 16-year-old boy – who could face charges of possession of protected animals. The charge carries a penalty of up to four years in prison and a 40,000 baht ($1,300) fine.

Weera said authorities have tried for years to crack down on the problem of vendors exploiting wildlife, particularly in popular tourist areas where people pay to pose for pictures with elephants, orangutans and other animals.

“It’s like a cat-and-mouse game. But this time it’s bigger because a celebrity like Rihanna posted the picture, and there were more than 200,000 `likes’ from around the world,” he said.

Rihanna also posted pictures of herself playing with a herd of elephants in the street Friday night, after which she tweeted: “They all hail Empress when She walk by.”

On the same night, she tweeted a few unprintable comments about what she apparently witnessed at an adult show in one of Phuket’s red-light districts.

Saturday’s tweets were devoted to the beach and photographs of the singer in a black bikini on a boat surrounded by turquoise water with limestone cliffs in the distance.

Before leaving Thailand on Sunday, she tweeted from the airport: “Gave the immigration guy my passport and he handed me this in return without a word. Lol.” It was a picture of the singer that said “I love Rihanna.”

Her next stop was Singapore before heading to Australia and New Zealand.