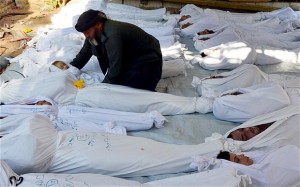 Russia has said it still suspected that last month’s chemical weapons attack in Syria was carried out by rebel forces, despite a report by UN investigators which France said showed the government was behind the attack.

Russian Foreign Minister Sergei Lavrov and French Foreign Minister Laurent Fabius set out their countries’ opposing views following talks in Moscow on Tuesday, one day after the investigators confirmed the deadly nerve agent sarin was used in the attack.

“We have very serious grounds to believe that this was a provocation,” Lavrov said of the attack, which the United States has said killed more than 1,400 people in rebel-held areas on August 21.

Lavrov, whose country has been the Syrian government’s most important ally in the civil war, said there had been “many provocations” by the rebels fighting President Bashar al-Assad’s government.

“They were aimed, over the last two years, at provoking foreign intervention,” he added.

He said the UN investigators’ report proved that chemical weapons had been used but that “there is no answer to a number of questions we have asked,” including whether the weapons were produced in a factory or home-made.

Speaking alongside Lavrov at the joint news conference after their talks, Fabius said the report was convincing.

“When you look at the amount of sarin gas used, the vectors, the techniques behind such an attack, as well as other aspects, it seems to leave no doubt that the (Assad) regime is behind it,” Fabius said.

France and the UN say that a military option remains on the table and is pushing for the UN resolution to reflect that.

But Moscow insisted that a new UN resolution on Syria would not allow the use of force.

Lavrov said that Russia “spoke clearly” about rejecting the use-of-force clause when the chemical weapons agreement was worked out in Geneva.

But if signs emerge that Syria is not fulfilling the agreement or there are reports of further chemical weapons use, “then the Security Council will examine the situation”.

In the UN report, investigators found “clear and convincing evidence” that chemical arms were used on a relatively large scale in the attack.

As expected, the report did not say who launched the attack in rebel-held Damascus suburbs.

It said: “The environmental, chemical and medical samples we have collected provide clear and convincing evidence that surface-to-surface rockets containing the nerve agent sarin were used … in the Ghouta area of Damascus”.

“The conclusion is that chemical weapons have been used in the ongoing conflict between the parties in the Syrian Arab Republic … against civilians, including children, on a relatively large scale,” the report said.

Addressing the media after he had presented the report to the Security Council, UN chief Ban Ki-Moon described the chemical attack as a “war crime”.

“It is the worst use of chemical weapons on civilians in the 21st century,” he said.

China on Tuesday said it would give the UN report a “thorough review”. Foreign Ministry spokesman Hong Lei in Beijing said his opposed the use of chemical weapons and wanted a political resolution.