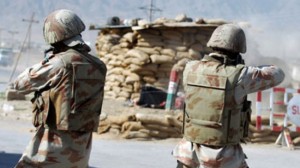 Police have arrested 185 people suspected to be involved in terror operations in Karachi, the capital of the Sindh province south of the country.

The arrested include 16 illegal immigrants and 43 absconders, police said on Thursday.

The arrests come after the Prime Minister Nawaz Sharif’s Federal Cabinet on Wednesday empowered the Rangers to launch operations to ferret out criminals from targeted areas of Karachi.

This decision was taken at a special session of the Federal Cabinet after extensive consultation for two days by Sharif with all stakeholders, including Sindh Governor Dr Ishratul Ibad, Chief Minister Syed Qaim Ali Shah, leaders of different political parties, representatives of business community and media persons.

The para-military forces started operations to find and arrest elements that undermine the security and stability of the city, security sources confirmed.

The couple were shot on a busy thoroughfare near the National Stadium, a cricket venue, in the city’s eastern district.

He had only one name for the dead officer.

Naveed’s wife sustained a bullet injury in the attack and has been taken to a naval hospital, he added.

Karachi is suffering from an unprecedented wave of killings and kidnappings blamed on Islamist fighters, criminals, and ethnic and political tensions.

Gang wars fed by ethnic and political bitterness, drugs and the Taliban, have created a culture of impunity in the city of 18 million, and the past two years have seen record death tolls.

In the first six months of 2013, 1,726 people were killed compared with a previous high of 1,215 in the same period last year, according to the Human Rights Commission of Pakistan.