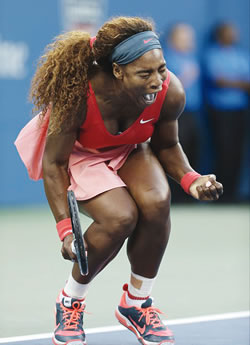 Williams won $3.6m, including a $1m  bonus for her success in US open tune-up events.

Williams won a rematch of last year’s US Open final that gave her and Azarenka a combined total of six of the eight major titles from the past two years.

Williams improved to 13-3 in their rivalry but two-time Australian Open champion Azarenka had won two of the previous three, most recently in last month’s Cincinnati final.

“It was never over until match point,” said Williams, who was broken twice in the second set when serving for the match.

“Victoria is such a great competitor. She was really able to push me into a third set. I was really stern with myself. I knew that if I wanted to win, I had to play better.”