Six Killed In Protests Against Removal Of Fuel Subsidies In Sudan 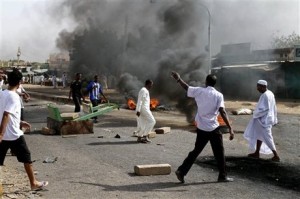 Six protesters have been killed in clashes with security forces during demonstrations in Sudan against a cut in fuel subsidies, medics and relatives say.

Wednesday’s protests in and around the capital Khartoum, which started three days ago, were continuing as night fell.

Demonstrators set a university building and several petrol stations on fire and blocked the main road to the airport near the Rotana luxury hotel, witnesses said.

A Reuters news agency reporter saw police fire tear-gas volleys into the crowd, while hundreds of officers and plainclothes security agents armed with guns or batons deployed to the city centre.

Others were seen sitting on the roof of government buildings.

Police detained about 20 protesters who were driven away in pickup vehicles, a witness said.

Against this backdrop, the US embassy in Khartoum urged all sides in Sudan to avoid further violence.

“We call on all sides not to resort to force and to respect civil liberties and the right to peaceful assembly,” the US embassy said in a statement issued in Arabic on Wednesday.

“In these difficult moments, it is necessary for all sides to show restraint and prudence.”

It said it had received “regrettable reports of serious injuries and attacks on property during demonstrations which turned violent”.

The government announced steep price rises on Monday for petroleum products after suspending subsidies in a bid to reform the economy.

President Omar al-Bashir said on Sunday the subsidies had reached “a level that is dangerous for the economy”.

Inflation in Sudan is already running at 40 percent.

Sudan lost billions of dollars in oil receipts when South Sudan gained independence two years ago, taking with it about 75 percent of the formerly united country’s crude production.

Since then Sudan has been plagued by inflation, a weakened currency and a severe shortage of dollars to pay for imports.