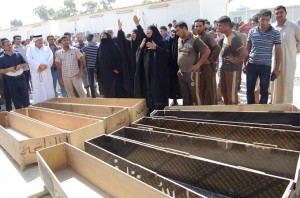 Armed men in Iraq have shot dead 16 members of the same Shia family before blowing up their two neighbouring homes south of the capital Baghdad, police and medics said.

The overnight attack took place in the town of Latifiya, 40km south of Baghdad, officials said on Wednesday.

“Gunmen broke into our house overnight and shot my father four times in the head, they killed my two brothers, they killed my cousin, they were shooting everyone they saw, I escaped from the back door,” Haneen Mudhhir said.

The killings came hours after at least 60 people were killed in a series of car bomb explosions in Baghdad.

The largest death toll was from a car bomb explosion in a busy street in the al-Talibiya district of northern Baghdad.

No one, nor any group, claimed responsibility for the attacks.

Violence in Iraq has intensified since April to levels not seen since 2008.

More than 4,000 people have been killed over the past five months alone, including more than 800 in August, according to figures provided by UN officials based in Iraq.

The bloodshed, 18 months after the withdrawal of US troops, has stirred concerns about a return to the sectarian slaughter of 2006-07, when the monthly death toll sometimes topped 3,000.