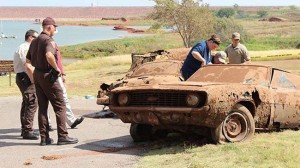 Oklahoma authorities said on Wednesday they were working to identify six human skeletons found in cars pulled from a lake in the western part of the state to determine if the skeletons are linked to decades-old missing persons cases.

An anthropologist for the Oklahoma Medical Examiner’s office was analyzing the skeletons on Wednesday, but Amy Elliott, a spokeswoman for the medical examiner’s office, said the identification could take a matter of days – or far longer.

Last week, Oklahoma Highway Patrol divers stumbled upon two mud and rust-covered vehicles on the bottom of Foss Lake during tests of new sonar equipment. On Tuesday, six skeletons were recovered from a blue 1969 Chevrolet Camaro and a car from the 1950s, the Oklahoma State Bureau of Investigation said.

The Custer County Sheriff’s Office released a statement on Tuesday that said one of the bodies had been identified, but no names would be released until family members were notified.

“Right now, the medical examiner’s office will rule whether or not there was a crime, if they can. You’re talking about decades-old skeletons here,” said Jessica Brown, public information officer for the State Bureau of Investigation. “We don’t know at this point whether this is a crime scene or not.”

Speculation centered on the Camaro as the vehicle in which three local high school students were riding when they disappeared in 1970. According to the National Missing and Unidentified Persons System, Jimmy Allen Williams 16, Thomas Michael Rios, 18, and Leah Gail Johnson 18, were last seen on their way to a football game in Elk City on Nov. 20, 1970.

Local media reported on Wednesday that the three teenagers were riding in Williams’ 1969 Chevrolet Camaro. The teens never arrived home that night and have not been located since.

Custer County Sheriff Bruce Peoples was quoted on Tuesday by local media as saying the second vehicle may date back to a cold case from the early 1960s. In that case, a car with two or three unidentified people was last seen in Canute, Oklahoma, about 14 miles south of Foss Lake. But the missing persons database has no records before 1969 for Canute.

The Custer County sheriff could not be reached for comment on Wednesday.