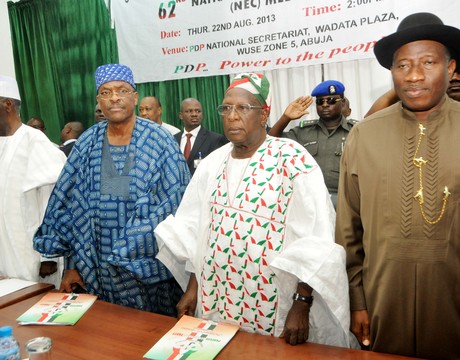 The South East zone of Peoples Democratic Party (PDP) has passed a vote of confidence on the leadership of President Goodluck Jonathan and the party’s National Chairman, Alhaji Bamanga Tukur just as it regretted last Saturday’s event that led to the fractionalization of the party.

In a statement issued on Friday and signed by the National Vice Chairman for the South East Zone, Col. Austin Akobundu (rtd), the party pleaded with all aggrieved members to avail themselves of the ongoing reconciliation moves for an amicable resolution of the crisis.

The statement reads, “The PDP South East Zone hereby places its implicit and unreserved vote of confidence on the leadership of the Dr. Goodluck Ebele Jonathan-led Federal Government and the Bamanga Tukur-led PDP.

“We regret the incident that trailed our Special Convention last Saturday at the Eagles Square, Abuja where some of our members staged a workout and wish to advise those aggrieved members to yield themselves to the on-going re-conciliatory measures for an amicable resolution of the standoff.

“The PDP as a large family is bound to have some altercations because of the different shades of opinions and interests. However, the ability to resolve the crisis as swiftly as it arises is what makes a party a truly national one.

“The PDP as a democratic organization maintains internal democracy and also gives room for resolution of grievances whose scope had been raised to the highest pedestal of party politics to accommodate elders and critical Stakeholders in the PDP since last Saturday.”