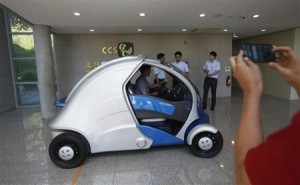 With a click on a smartphone, the experimental “Armadillo-T” electric car made in South Korea will park itself and fold nearly in half, freeing up space in crowded cities.

The quirky two-seater, named after the animal whose shell it resembles, may never see production but it is part of a trend of developing environmentally friendly vehicles for urban spaces.

When it comes time to park, the rear of the vehicle folds over the front, almost halving its body length to just 1.65 meters (65 inches).

“They can be parked in every corner of the street and buildings, be it apartments, shopping malls or supermarkets,” said Suh In-soo, a professor at Korea Advanced Institute of Science and Technology who led development of the car.

Suh did away with rear-view mirrors by adding tiny digital cameras that show the back and sides of the car on a flat screen on the dashboard. A Windows-based computer system communicates with the driver’s smartphone and enables self-parking.

The Armadillo-T cannot legally venture on to the road in South Korea because it does not meet certain mandatory criteria, such as withstanding crashes. Suh said South Korea should relax rules for micro cars, exempting them from crash requirements because of their relatively low speeds.

A video demonstrating the prototype has been viewed more than 780,000 times on YouTube.