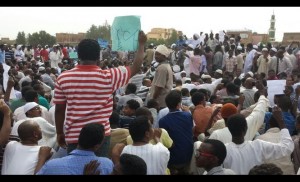 Several people have been injured in Sudan’s capital Khartoum after police opened fire on a funeral that turned into an anti-government protest.

The demonstrators called President Omar al-Bashir a “killer” on Saturday – the sixth day of protests spurred by fuel-price increase in the African country already burdened by economic pain and war.

Tear gas was fired on thousands of people who had gathered for the funeral of Salah al-Sanhouri, a 26-year-old pharmacist who was killed the previous day, chanting: “The people want the downfall of Bashir.”

Sanhouri was among the four protesters killed by unidentified assailants on Friday when more than 5,000 people demonstrated in Khartoum in the biggest turnout in central Sudan for many years.

Police said in a statement that unknown armed men had opened fire on a group of protesters.

Sanhouri’s relatives said he was shot in the street outside his pharmacy, in the same street where the protest came under attack again on Saturday.

Thousands of people have been out on the streets daily across Sudan, angry at the rising cost of fuel. Authorities say 33 people have died over the past week.

More than 1,000 people had gathered in Khartoum’s Burri district, home to a senior government official, for Saturday’s funeral, before it grew to more than 3,000, many of whom were shouting “Bashir, you are a killer” and “Freedom, freedom,” witnesses said.

Three female protesters said that they were surrounded by dozens of pickup vehicles and security forces in a main street and hit with tear gas and gunfire, the AP news agency reported.

Human-rights groups have accused the government of violent repression of protesters by adopting a shoot-to-kill policy.

The government’s crackdown is turning the protests – prompted by the lifting of fuel and gas subsidies – into the most serious challenge to al-Bashir’s 24-year-long rule in years.

Opposition activists have accused Bashir’s National Congress Party of vandalism and of arming militias to turn the public against the protesters.

The Bashir government appears to be trying to impose a blackout. The Saudi-owned Al-Arabiya satellite television station and Sky News Arabia said on Friday that their Khartoum offices were ordered shut by the government.

Sudanese news outlets online have reported that photographers and cameraman have been barred from covering the protests, while editors have said they were ordered to describe protesters as “saboteurs”.