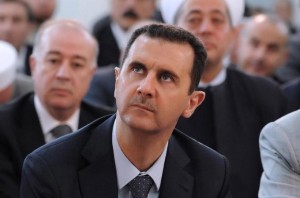 Syrian Foreign Minister Walid al-Muallem has said his country is determined to go forward with the destruction its chemical weapons stockpile.

Speaking at the UN on Friday, Muallem also said he hoped that the UN assembly can pave the way for a deal that would bring the two warring sides in Syria to the negotiation table.

“We will commit because we are determined to go forward in the respect of [the agreement of] destroying the chemical weapons,” Mouallem said in an interview with James Bays, Al Jazeera’s diplomatic editor, at the UN headquarters in New York.

Mouallem, who is in the US to participate in the annual UN General Assembly of global leaders, said the government would not make concessions regarding the role of President Bashar al-Assad, whom Syria’s opposition want ousted.

“Nobody can speak about the role of President Assad because it is mentioned in the constitution. So we will not violate our constitution,” Muallem said.

“His role for the Syrian people is very important and crucial.”

When asked about the prospect of peace in his country, Muallem said it was “premature to speak about it as long as fighting is ongoing on the ground”.

More than 100,000 people have been killed in Syria’s conflict, which started in March 2011 in the form of peaceful protests against the rule of Assad and developed into a civil war.

Just hours before Muallem spoke, a car bomb exploded in the suburbs of the Syrian capital Damascus, leaving at least 30 people killed and scores of others injured.

The UN Security Council is expected to meet at 8 p.m. ET (0000 GMT) on Friday to discuss a draft resolution to eliminate Syria’s chemical weapons.

The draft – already agreed upon by Russia, China, the US, France and Britain – includes two legally binding demands: that Syria abandons its chemical stockpile; and allows unfettered access to chemical weapons experts.

Ahead of the vote, the 41-nation executive council of the Organisation for the Prohibition of Chemical Weapons (OPCW) must agree on a plan to secure and destroy Syria’s chemical arms stockpile.

If an agreement is sealed at the organisation’s headquarters at The Hague, the UN Security Council in New York can then vote on a UN resolution on Syria’s chemical weapons programme. [AlJazeera]