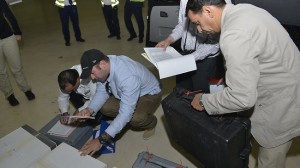 Syria has begun supplying details of its chemical arsenal, the world’s chemical weapons watchdog said on Friday, as rebels agreed to a truce with jihadists in a key border town.

A senior official also said Damascus wanted a ceasefire in the 30-month war, which has reportedly killed more than 110,000 people and forced more than two million to flee.

Iranian President Hassan Rowhani has offered to broker talks between the Syrian opposition and the Islamic republic’s key ally in Damascus.

Hours before a deadline for President Bashar al-Assad’s regime to provide details on its arsenal, the Hague-based group tasked with dismantling it said it had received an initial report.

“The Organisation for the Prohibition of Chemical Weapons has received an initial disclosure from the Syrian government of its chemical weapons program,” an OPCW statement said.

Its Technical Secretariat is now examining the details, it said.

The organisation has postponed a meeting of its Executive Council set for Sunday that had been due to discuss how to dismantle Syria’s chemical weapons programme.

Damascus had until Saturday to supply details of its arsenal, in line with a US-Russian plan that helped prevent military action on regime targets following a chemical attack last month that killed hundreds of people.

The plan stipulates that Mr Assad’s regime hand over its chemical weapons and facilities, which would be destroyed by mid-2014.

But on Wednesday, Mr Assad said in an interview that the task could take at least a year and cost a billion dollars.

On the ground, jihadist rebels fought fiercely for the town of Azaz on the Turkish border before seizing it Wednesday from mainstream Free Syrian Army (FSA) rebels.

The move by Al-Qaeda front group the Islamic State of Iraq and the Levant (ISIS) triggered the ire of the political opposition group the National Coalition.

It issued a rare condemnation of ISIS, accusing the jihadists of violating the principles of the revolution.

The Syrian Observatory for Human Rights said that the Northern Storm brigade, which is loyal to the FSA and was based in Azaz, has agreed to a truce with ISIS.

The deal was brokered by Liwa al-Tawhid, a powerful rebel brigade loyal to the FSA, which sent fighters to deploy between the two sides in Azaz, the Observatory said.