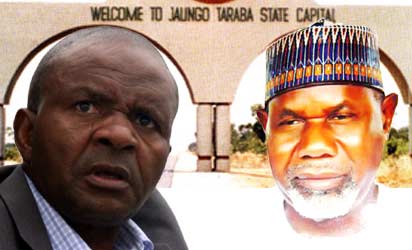 President Goodluck Jonathan’s studied silence on the crisis rocking Taraba State since the return of Governor Danbaba Suntai to the country last week Sunday has been deliberate and will remain so in respect for rule of law and the country’s constitution.

Special Adviser to the President on Political Matters, Ahmed Gulak stated in an exclusive interview with the PUNCH on Friday that the president chose to abstain from taking a stand on the matter due to its largely religious and political colouration.

It would be recalled that a move by Suntai’s camp to return the ailing governor to office divided the state House of Assembly just as the acting governor, Alhaji Garba Umar, has insisted that he is in charge and urged Tarabians to ignore the purported dissolution of the state executive council by his boss.

To keen watchers of the political drama playing out in Taraba State, Mr. Jonathan ought to have waded in to prevent the matter from snowballing into a major crisis but Gulak said the president would rather prefer the impasse is resolved by the relevant constitutional organs without external interference.

While saying the state House of Assembly is the appropriate constitutional organ that should resolve the crisis, the presidential aide added that the national leadership of the ruling Peoples Democratic Party could also consider stepping-in in form of a political solution to the political lock jam.

He said, “What Nigerians should appreciate is that we are operating federalism. Each state of the federation has constitutional organs saddled with the responsibility of solving such impasse.

“Taraba State, like any other state of the federation, has the legislature and the judiciary that are capable of resolving the crisis.

“President Jonathan cannot wade into the crisis in the state. The country’s constitution has taken care of that.

“The President does not want to be dragged into that issue that has religious and political colouration. President Jonathan has been rightly advised on this matter.  It is not negligence, it is simply respect for the rule of law.

“We have constitutional organs to deal with the situation. The House of Assembly is the appropriate organ that can resolve it. There is also the option of political solution.

“As part of a political solution, the party at the national level can initiate moves following which the assembly and judiciary will solve it.”