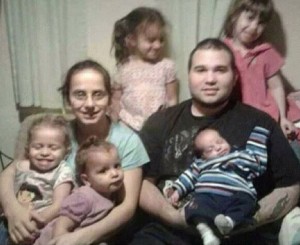 Just a month ago, Nas stepped up and helped raise over $50,000 for a DC single father with 8 kids who had lost his home in a fire, and now both The Game and Drake have stepped up to pay the funeral costs for a family in Ohio.

Last week, a woman named Anna Angel was finishing up her shift at Burger King when she received the tragic call that her house had caught fire, killing her boyfriend and five small children. When The Game heard the devastating news, he immediately contacted the family and donated $10,000 out of his pocket, and both his production company, 51 Minds, and Drake chipped in, to bring the total cost to $22,500.

Meet Ana Angel, a mother of 5 who lost her 5 children & her boyfriend (father of her youngest) in a house fire early Sunday morning in Tiffin, Ohio. I can deal with a lot of things but people losing their children is something that kills me every time. Ana Angel was working her shift at Burger King when she was informed by her manager Pat Boes that her home had burnt down with her family inside it & no one survived. I cannot imagine the feeling she had at that moment & when I 1st read this story yesterday I just happened to be on the phone with DRAKE @champagnepapi & told him about it so he offered to help alongside me……..

So between me & DRAKE on behalf of @TheRobinHoodProject we split a $20,000 donation both donating 10k apiece as well as @51minds (Marrying The Game producers) choppin in with $2,500 so that Ms. Angel can afford the funeral costs for her 5 children & boyfriend as well as a point A to B vehicle. I want to thank Pat Boes for helping us locate Ana Angel & spokesperson for the family Keith Hodkinson for helping us get the $ to her in her time of grief. If you’d like to personally donate Donations are going to: Anna Angel Donation Fund, ℅ US Bank, 730 West Market Street, Tiffin, OH 44883 FOLLOW @therobinhoodproject & hash tag #therobinhoodproject & tag people you think would love to help & learn of this tragic story that took 5 children’s & a mans lives…. God Bless – Ana Angel

“What @thedocumentary is doing will never be forgotten. Honored to be able to help people along side my brother.”