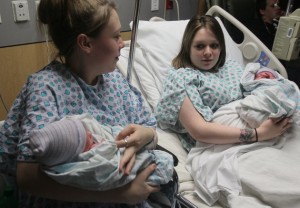 Aiden and Donavyn didn’t wait until new year’s day to come screaming into the world, but the circumstances of their births are still pretty special: The babies were born about two hours apart to Ohio mothers who are identical twins.

The Akron Beacon Journal reports that the 19-year-old mothers — Aimee and Ashlee Nelson — weren’t raised to do things alike and did not plan the births to come at the same time.

In fact, their due dates were about a week apart. Aimee’s son, Donavyn Scott Bratten, was born just after noon on the last day of 2012.

Ashlee’s son, Aiden Lee Alan Dilts, made his appearance at about 2:00pm They were delivered by the same doctor at Summa Akron City Hospital.