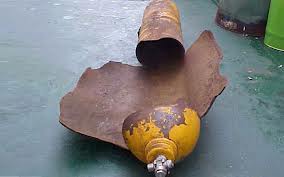 Two sisters were Friday night killed in an explosion that rocked a village in Abuja.

Faith Oche, 31, and Mary Oche, 25, said to be co-tenants to Miss Rose died as a result of the explosion which arose from a domestic gas cylinder in Rose’s property.

The explosion, according to eyewitnesses, sounded like a bomb went off, as it rocked the village to its foundation with people scampering for safety.

The hardest hit by the explosion were the sisters whose remains were a gory sight, as the head of one was reportedly blown off, while the second had her head shattered.

According to an eyewitness, Mr. Joseph Mark, a tenant in the house, Miss Rose, who was cooking in her apartment, found that a fire had entered the nozzle of the cylinder and threw it outside the compound.

Mark said when people saw the cylinder with burning fire, they ran and prepared water and detergent solution and sands which they were throwing at a distance to put out the fire.

He said the two sisters, Mary and Faith showed some bravery as they approached the cylinder with the aim of throwing in more sand, but unfortunately, the cylinder exploded suddenly into their faces.

Police officers who visited the scene, said investigation had commenced into the matter while the bodies of the victims had been deposited at the mortuary of the National Hospital, Abuja.