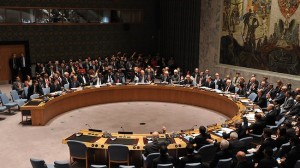 The UN Security Council has voted unanimously to secure and destroy Syria’s chemical weapons stockpile, a landmark decision aimed at taking poison gas off the battlefield in the escalating two-year conflict.

The vote this morning marked a major breakthrough in the paralysis that has gripped the council since the Syrian uprising began. Russia and China previously vetoed three Western-backed resolutions pressuring President Bashar Assad’s regime to end the violence.

For the first time, the council endorsed the roadmap for a political transition in Syria adopted by key nations in June 2012 and called for an international conference to be convened “as soon as possible” to implement it.

“Today’s historic resolution is the first hopeful news on Syria in a long time,” UN Secretary-General Ban Ki-moon told the council immediately after the vote.

Ban said the target date for a new peace conference in Geneva is mid-November.

The resolution calls for consequences if Syria fails to comply, but those will depend on the council passing another resolution in the event of non-compliance. That will give Assad ally Russia the means to stop any punishment from being imposed.

The resolution calls for consequences if Syria fails to comply, but those will depend on the council passing another resolution in the event of non-compliance.

The agreement allows the start of a mission to rid Syria’s regime of its estimated 1000-ton chemical arsenal by mid-2014, significantly accelerating a destruction timetable that often takes years to complete.

“We expect to have an advance team on the ground (in Syria) next week,” OPCW spokesman Michael Luhan told reporters at the organisation’s headquarters in The Hague, Netherlands.

Earlier, the UN said its inspectors in Syria will investigate a total of seven sites where chemical weapons were allegedly used.

The UN office in Damascus said in a statement Friday that its team will write up a report “it hopes will be ready by late October.”

It was previously thought the UN probe would only look into three locations in Syria.

The United States says the August 21 attack in the Damascus suburb of Ghouta killed 1429 people. Ghouta has been the focus of the UN team so far.

The northern town of Khan al-Assal is also on the list. President Bashar Assad’s government and rebels have traded accusations of chemical weapons use in an attack there on March 19.

The decision on came shortly after the world’s chemical watchdog adopted a plan to dismantle Syria’s chemical arsenal.

“The decision is adopted and it is effective immediately,” Organisation for the Prohibition of Chemical Weapons spokesman Michael Luhan told journalists in The Hague on Saturday after the Executive Council meeting.

“After a last-moment unexpected delay our Executive Council has met and has adopted a decision on an accelerated program by the OPCW to destroy Syria’s chemical weapons,” Luhan said.

US Secretary of State John Kerry has called the OPCW document the “rules and regulations” of Syria’s chemical disarmament to be enshrined in the unanimously passed UN resolution .

The draft OPCW document said the watchdog will start inspections no later than October 1 and eliminate all of Syria’s chemical weapons by mid-2014.

“The decision is effective immediately and we expect an advance team on the ground in Syria by next week,” Luhan added.

The chemical weapons deal is the biggest diplomatic achievement on Syria after more than two years of a bitter civil war that the UN says has killed more than 100,000 people.

Syria agreed to give up its chemical weapons as part of a US-Russian deal struck earlier this month. [AFP]