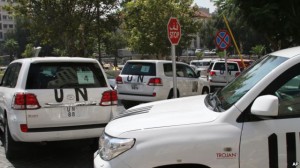 “According to my information, the inspectors’ report will come next Monday,” Asselborn told
Deutschlandfunk public radio on Wednesday.

US President Barack Obama said in an address to the nation on Tuesday that, while diplomatic initiatives related to a Russian plan to place Syria’s chemical weapons under international control had produced some “encouraging signs,” it was too early tell if they would work.

Obama said the US would hold off on a planned military strike to give the diplomatic efforts a chance and would give UN inspectors the opportunity to report their findings.

In a televised speech from the White House, he cited Russia’s willingness to push Syrian President Bashar al-Assad to relinquish chemical weapons and Damascus’s sudden willingness to join the 1997 Chemical Weapons Convention.

The US has repeatedly accused Assad’s regime of using chemical weapons in an attack near Damascus on August 21, which Washington says killed 1429 people. The Syrian government has denied responsibility.
European Union foreign policy chief Catherine Ashton called for the UN experts investigating the use of chemical weapons near Damascus to complete their work as soon as possible.

“It is now of the utmost importance that they complete their report as soon as possible, that the work going on in laboratories in Sweden and Finland and elsewhere gives us the information … that is already established through other reports that many member states and international partners have been engaged in,” she told the European Parliament in Brussels.

The European Parliament is expected to vote on a Syria resolution on Thursday.