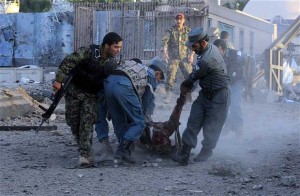 Heavily armed Taliban suicide attackers have staged a dawn strike on the US consulate in the Afghan city of Herat, setting off two car bombs and sparking a shootout with US forces.

The sophisticated attack early on Friday in the western city, a key business hub near the Iranian border, underscores how the Taliban are able to strike outside their main centres in the south and east.

At least one Afghan guard was killed in the attack and 18 other people wounded, but US officials said there were no US casualties with all consulate staff safe and accounted for.

The US State Department said the attackers appeared to be wearing suicide vests and detonated a truck bomb that “extensively” damaged the front gate.

Afghan security officials said six attackers took part in the assault, detonating a minivan bomb and then a four-wheel drive vehicle, before engaging in a gunbattle with security forces.

The Taliban publicly refuse to negotiate with the Afghan government, branding Afghan President Hamid Karzai a US puppet, but opened a liaison office in Qatar in June billed as a step towards talks with the Americans on a possible prisoner swap.

Abdul Hameed Hameedi, the deputy security chief of Herat province told AFP that after the two vehicles were detonated, “five suicide bombers engaged in a gunbattle with the Afghan security forces, and after a while, all of these suicide bombers get killed in the attack.”

He said an Afghan guard at the US consulate was killed and two other guards and two policemen wounded. A number of civilians were wounded because of the powerful explosion, he said.

Abdul Raouf Ahmadi, a spokesman for Herat police, said US and Italian forces were called to the scene and cordoned off the area.

The Taliban claimed responsibility for the attack.