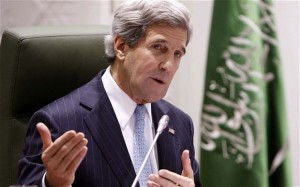 World powers US and Russia are nearing an agreement on how best to deal with the situation in Syria, as US Secretary of State John Kerry and Russian Foreign Minister Sergey Lavrov have now agreed to meet later this month to try to set a date for a long-delayed peace conference for Syria.

The two politicians said on Friday that the successful resumption of peace talks depended on the outcome of the ongoing US-Russian talks aimed at securing Syria’s chemical weapons cache.

Kerry and Lavrov met UN-Arab League envoy Lakhdar Brahimi in Geneva to discuss the potential progress of talks, leaving their teams of chemical weapons experts to thrash out a deal over the Syrian disarmament.

“We are committed to trying to work together, beginning with this initiative on the chemical weapons, in hopes that those efforts could pay off and bring peace and stability to a war-torn part of the world,” Kerry told reporters at a news briefing.

The secretary of state said the meeting was likely to take place around September 28 to coincide with the annual UN General Assembly in New York.

Lavrov said Russia has supported the peace process from the start of the Syrian conflict but that “it is very unfortunate that for a long period the Geneva communique was basically abandoned”.

After meeting Brahimi in Geneva, where they are trying to confirm a Russian plan to remove Syria’s chemical weapons and avert US-led military action, Lavrov and Kerry said they agreed to try and make progress on a broader effort to end a conflict that has divided the Middle East and world powers.

A spokesman for Lavrov said he and Kerry had a comprehensive meeting, where they outlined “the logistics, process and agenda for the days ahead and they agreed on a shared goal of achieving a framework for the path forward. The entire delegation will reconvene tomorrow morning.”

A statement from the US State Department, issued early on Friday, reflected the differing positions.

“Secretary Kerry … made clear that while the United States felt the developments this week provided a positive opportunity, any plan must be credible, verifiable and implemented in a timely manner. And finally, there must be consequences for violation.”

Assad is accused by the US of killing 1,429 people in a chemical weapons attack in a Damascus suburb on August 21, and threatens military strikes if a diplomatic solution to the crisis is not found.

Assad denies his regime was responsible for the attack, and pins the blame on rebel forces. Russia, Assad’s ally, also says there is no proof that Assad ordered the attack and is opposed to any military intervention.

He called it “an important step towards the resolution of the Syrian crisis” and added: “This confirms the serious intention of our Syrian partners to follow this path.”

But Kerry underscored that Washington could still attack if it was not satisfied: “This is not a game,” he said on Thursday. [AlJazeera]